Before my father's time，Tanba potters saw themselves as craftsmen producing utility wares. My father's generation was the first who viewed themselves as artists rather than craftsmen. Since then，a number of Tanba potters became innovators.
There have been two distinct lines of development. One line elevates function-based traditional Tanba pottery to a very high level of artistry.The other line completely breaks free from traditional Tanba wares to explore new forms and ideals. I regard myself in the latter category.

Quite a few potters of my generation studied in Kyoto. We were all influenced by the creative energy and activities that eventually led me to a new direction. Among contemporary Japanese potters，I admire Shoji Kamoda; Kiyoyuki Kato，and Sueharu Fukami. These potters have very different styles，but they share one common character of breaking through previously accepted boundaries.
A lot of Tanba pottery vessels are vase forms and storage jars. Tanba is also known for its ceramic sake bottles. Today，the surface of Tanba pottery is often covered with an ash glaze and continues to be fired in wood kilns. Tanba's community kiln is among Japan's historic Six Old Kilns，the other five being associated with Bizen，Echizen，Seto，Shigaraki，and Tokoname styles. Collectively the Six Old Kilns are known in Japan by the term rokkouyo. But most potters in the area now use their own family kilns rather than the large community kiln. 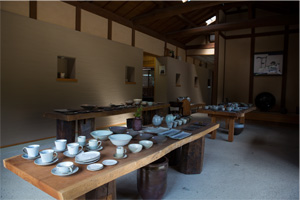 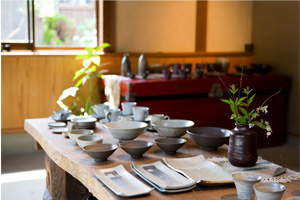 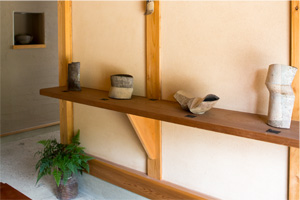